There were so many great moments:

Our group early on in the camp (Titch, Jen, Louis, Stef). A lot of fun. Watching Louis disappear off over the final climb to Embrun on his own was pretty inspirational:

A lot of laughs with Stef across many hours of cycling. I nearly fell off my bike a few times I was laughing that hard. Here we are getting close to arriving in La Grave, in a depleted haze:

Riding up the Galibier wih Julian, Iain and Stef. Jules gave us an impromptu Tour de France history lesson, followed by a lesson in descending:

Watching Iain tough it out over many, many climbs:

He’s even had time to set up camp here while waiting for us:

Fellow Endurance Corner athletes Rob Mohr and Walter McCormack. Rob is a gazelle in running shoes, and Walter is an AXE on the bike (and quite handy to draft behind in open water – like being behind a mid-sized boat). Good blokes. Here they are analysing the day’s events (sponsored by Apple):

Riding through part of the 2016 Tour route. It was nice to know that even the TDF is not immune to the force of the French unions. Road surfacing has been affected by striking recently (we didn’t notice it until we hit a 7km climb which had a half-finished gravel surface). Hopefully they will have caught up by 22 July:

Running with Rob and Stef in Morzine. It was great listening to their views & philiosophies on nutrition and training. I am going to add some different foods into my diet for gut health. An hour went by incredibly quickly around this lake: 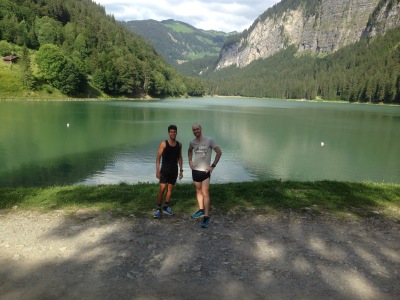 The “gravestones” at each kilometre mark of the major climbs. An easy way to create a series of short-term goals:

I am pretty good at home when it comes to getting my training done, but quite often it takes a conversation with myself (and a bit of mental energy) to get out the door, or get on the trainer, or get to the pool. This didn’t happen once in France – that is the real power of these camps. The training was definitely tiring, but motivation was easy.

View all posts by benbalesmoore